I have restored several antique flutes to playing condition. 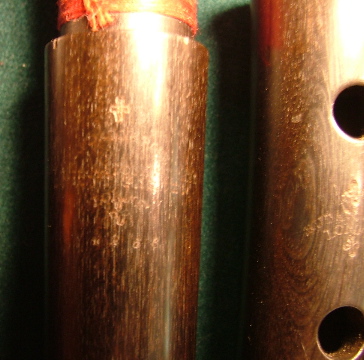 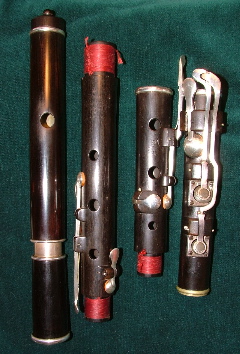 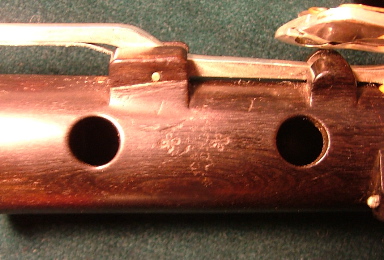 This one needed a lot of work. I repaired a fractured F key mount, two split tenons, two cracked sockets, and cracks in the barrel and head joint. It plays beautifully, with the rather sharp A and B and flat F-sharp typical of flutes of the time. Thanks to Robert Biggio for the exact date of manufacture.

My friend Frank Claudy thinks this is one of the best flutes he has played, and I agree. It’s my favorite, used for all the D flute tracks on my new CD. It needed very little restoration “out of the box,” but I had Jon Cornia repair the usual head joint and barrel cracks and outfit the flute with purse string leather pads. 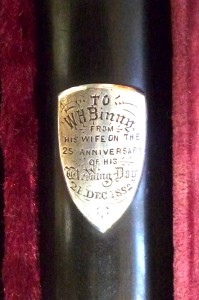 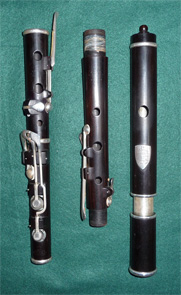 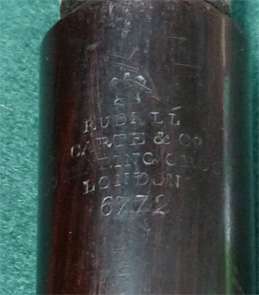 The measurements, hole sizes, and embouchure of this flute are very much like that of serial number 6225 shown above. By this time, the Boehm system flute had largely taken over for younger players and in most orchestras, so Rudall and Carte were turning out only small numbers of these simple system flutes, probably working from a single standard set of templates and reamers. Being of a more dense wood, this flute has a more solid tone than 6225. This one required only a repad, but this was made quite difficult by the fact that the silver wires holding several keys in place were broken off flush with the face of the block. I susequently had Jon Cornia outfit it with leather purse string pads. 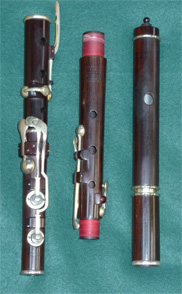 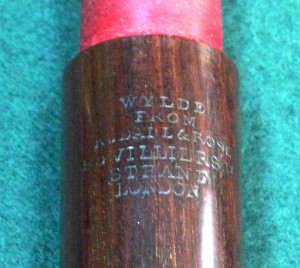 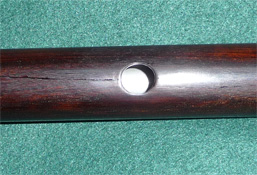 Henry Wylde was one of Rudall and Rose’s master builders. Several well known Irish flute players currently use Wylde flutes. At some point in his career they allowed Wylde to use their factory to build his own style of simple system flute and label these flutes as “from Rudall & Rose.” This one had a head joint crack running through the embouchure that had been clumsily filled, so that the tone was fuzzy. Jon Cornia disassembled the head joint and did a proper repair, leaving a < 1 mm repair.

This represents perhaps the best model of conical flute ever made in the Americas. It has a bit smaller bore than the Rudall Rose flutes, but a full rich tone and good intonation. This is the model flute favored by Grey Larsen. The only restoration required was to improve the seal of one cork tenon. 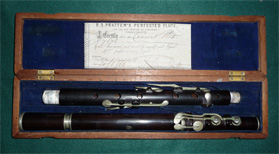 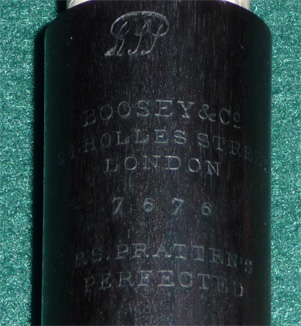 This Pratten’s Perfected was an eBay find. The short F block and key were missing, so few bid on it. I commissioned John Gallagher to fabricate and install the replacement key and block, and he did beautiful work. With the original head joint this flute is very difficult to play, requiring high breath pressure that quickly becomes tiring. For session playing I simply use my Patrick Olwell head joint from the Pratten model that I got from him in 1996, and it plays very nicely.