I play in two bands, GoldRing and Hup!, and formerly played with The Jig Is Up! 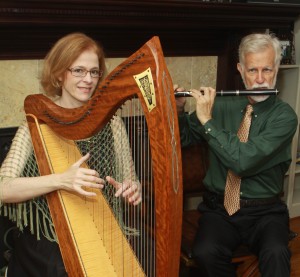 Larry teams with well known harpist Therese Honey as GoldRing. The name is taken from the five-part traditional Irish jig “The Gold Ring” and from the symbol each has worn since their marriage in 1996.

Celtic harp and wooden flute complement each other well, and the duo makes the most of this musical affinity in playing the harp tunes, airs and dance tunes of traditional Irish music. GoldRing has performed at the Milwaukee Irish Festival, the Mississippi Celtic Festival and many private engagements.

In February 2020 a pub owner contacted me about possibly providing traditional Irish music weekly at a new pub. I contacted a couple of old band mates and fiddle player who had recently moved to Houston to see if they were interested. They were, and we held a couple of rehearsals to begin building a repertoire. We played three or four weekly gigs and were scheduled to play St. Patrick’s Day when the pandemic closed everything down. A year later the pandemic was subsiding and we had all four been immunized against the coronavirus, so we resumed playing weekly. Our goal is to play for our own enjoyment, which means finding new material to play in more diverse arrangements than one might hear in the usual Irish session. We believe that music that interests everyone in the band will also engage the audience.

The Jig Is Up!

From 2009 to 2019 this band was my main commitment. After playing with these special musicians in sessions for several years I was excited when we decided to form a band to see what we could forge from traditional melodies and song. One result was our three CDs (click here) of which were are quite  proud, including tracks that received play on National Public Radio’s Thistle and Shamrock show and RTE Radios’ Ceili House. Along the way we played numerous festivals, gave Christmas Concerts at Houston’s University of St. Thomas, had a regular weekly gig for some seven years (at the now closed Gorgeous Gael Pub in the Rice Village area of Houston), and made tours through Texas, Louisiana, Oklahoma, Arkansas, Alabama, and North Carolina. I still cherish my friendships with these five guys, Judson Heartsill, Matthew Lewis, Diehl Moran, Kendall Rogers, and Robert Shaddox. Time constraints and new family commitments finally caused us to close up shop after Christmas 2019, but not without a host of fond memories.